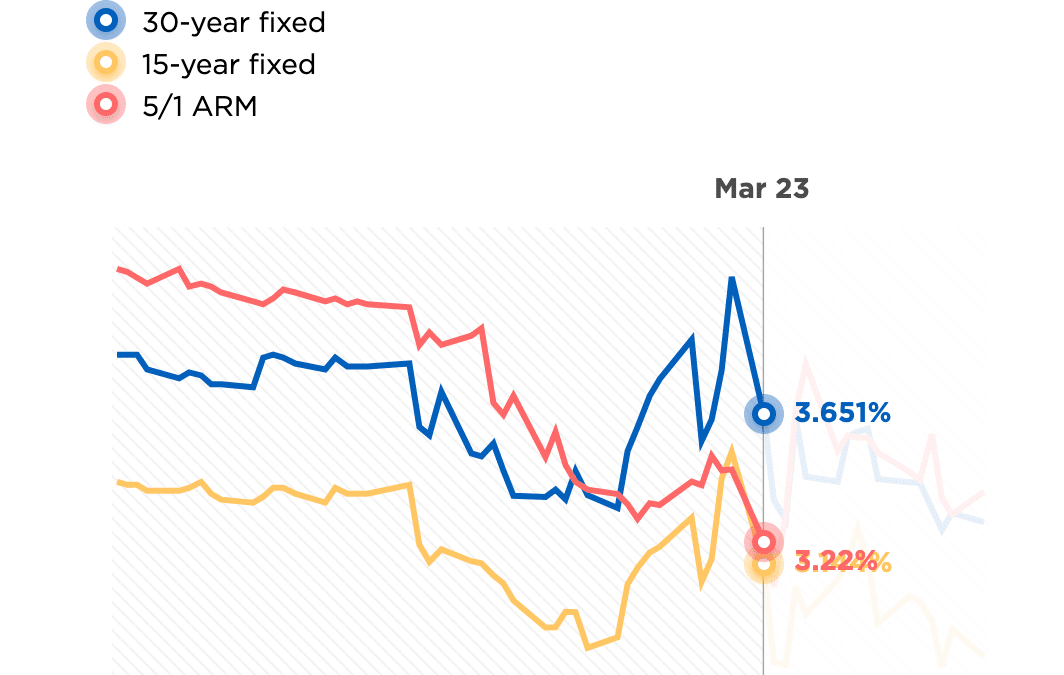 I wanted to provide some clarity on what is happening to the mortgage interest rate market that relates to the most current market activity. Key point to remember is that the mortgage backed security market (bond yields) along with the 10 year treasury are what dictates mortgage rates.

The mortgage market has retracted all the substantial gains since the end of February and then some. A lot of spreads including high balance loans (loan amount up to $765,000) have become extremely unattractive. Borrowers who did not lock in their refinance last week or early this week missed the boat… for now. The mortgage market has crazy ups and downs, but this has been unheard of based on past market swings. And the 10-year treasury is still under 1%!

Most of the blame for the recent spike in rates is due to uncertainty around the world but now inside the US and how this Virus will impact our economic growth and for how long! The Fed is injecting a ton of financial resources into the markets to help with liquidity issues that are occurring due to the economic slowdown.

Yesterday, the New York Fed announced during mid-day trading session that it would offer $1.5 trillion of reposition and Treasury purchases in order to address the lack of liquidity that has been hampering markets in recent days. Though this is not yet a return to Quantitative Easing in terms of buying long-term assets, rather the Fed will be buying short-term Treasury bills with maturities less than 1 year. The Fed bought an additional $500 billion, three-month offering on Thursday and will offer $1 trillion in short-term funding on Friday. The facility will offer $5tn of liquidity out to the end of April.

Staying with the Federal Reserve, the market has changed expectations as now it’s pricing in 100bps of interest rate cuts at the next meeting on March 18th. This would bring the fed funds rate directly to the zero bound. Also, don’t rule out an early emergency cut given the volatility. If that occurs, Chair Powell’s press conference should focus on the next policy steps should the outlook deteriorate further. The Fed may first use forward guidance to signal their intent to keep rates on hold until downside risks to the outlook subside.

So what is next when it comes to interest rates!!! Rates are still really attractive and are in the 3.5% range currently!!!!

The lending market is stable with pricing that should improve once the Virus Fears subside. The bond market ended up slightly today (first time this week) and the stock market had a huge Friday rally.

This message is in part, a response to a widespread misunderstanding about the Federal funds rate being adjusted to 0% this week. For more information about what that means read more here.